Why Do People Hate The Jews? 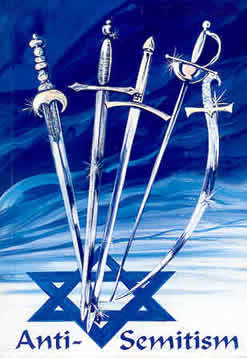 It has been said that the history of almost all of the Jewish holidays can be summed up succinctly: "They wanted to kill us; we won. Let's eat." Why has anti-Semitism been so pervasive in so many countries, in so many time periods and for so many reasons? (One begins to wonder. Perhaps there is something wrong with the Jews and Judaism? After all, there is an old Yiddish saying -- "If one person calls you a donkey, ignore him; if two people call you a donkey, buy a saddle.")

Between the years 250 CE and 1948 CE - a period of 1,700 years - Jews have experienced more than eighty expulsions from various countries in Europe - an average of nearly one expulsion every twenty-one years. Jews were expelled from England, France, Austria, Germany, Lithuania, Spain, Portugal, Bohemia, Moravia and seventy-one other countries.

Historians have classified six explanations as to why people hate the Jews:

Every other hated group is hated for a relatively defined reason. We Jews, however, are hated in paradoxes: Jews are hated for being a lazy and inferior race - but also for dominating the economy and taking over the world. We are hated for stubbornly maintaining our separateness - and, when we do assimilate - for posing a threat to racial purity through intermarriages. We are seen as pacifists and as warmongers; as capitalist exploiters and as revolutionary communists; possessed of a Chosen-People mentality, as well as of an inferiority complex. It seems that we just can't win.

Now we know what are NOT the reasons for anti-Semitism.

FIND OUT WHY PEOPLE HATE THE JEWS:

The Reason for Anti-Semitism (article)

The Reason for Anti-Semtism (online seminar)

The History of Jewish Persecution

Why Do People Hate The Jews? by Ken Spiro from AishAudio.com

“Of all the extreme fanaticism which plays havoc in man’s nature, there is not one as irrational as anti-Semitism. … If the Jews are rich [these fanatics] are victims of theft. If they are poor, they are victims of ridicule. If they take sides in a war, it is because they wish to take advantage from the spilling of non-Jewish blood. If they espouse peace, it is because they are scared by their natures or traitors. If the Jew dwells in a foreign land he is persecuted and expelled. If he wishes to return to his own land, he is prevented from doing so.”

"The uniqueness of anti-Semitism lies in the fact that no other people in the world have ever been charged simultaneously with alienation from society and with cosmopolitanism, with being capitalistic exploiters and also revolutionary communist advocators. The Jews were accused of having an imperious mentality, at the same time they're a people of the book. They're accused of being militant aggressors, at the same time as being cowardly pacifists. With being a Chosen people, and also having an inferior human nature. With both arrogance and timidity. With both extreme individualism and community adherence. With being guilty of the crucifixion of Jesus and at the same time held to account for the invention of christianity."

- A speech about the irrationality of anti-Semitism
by professor Michael Curtis, of Rutgers University, 1987